Mistakes of the past

In 2018, I ran my first 24 hour food tour in NYC. I was going to take the hackNY fellows around the whole city to some new places and some favorites. Although we went to some great places, I totally miscalculated the timing. We went from 8pm to 8pm, saturday to sunday. By 5 am everyone was tired, full, and inebriated. I kept trucking, and got a total of 1 and a half hours of sleep, waking up at 8am, ready to go. The rest of the day was absolutely terrible, I was in no position to do anything but I kept moving and at the end of the day I crashed and slept VERY late.

This year was going to be different, I was going to do it in the morning instead of the night, and was going to plan in some breaks throughout the day. So I planned the day via a foursquare list, and in there added some time just to sit down and relax in parks. 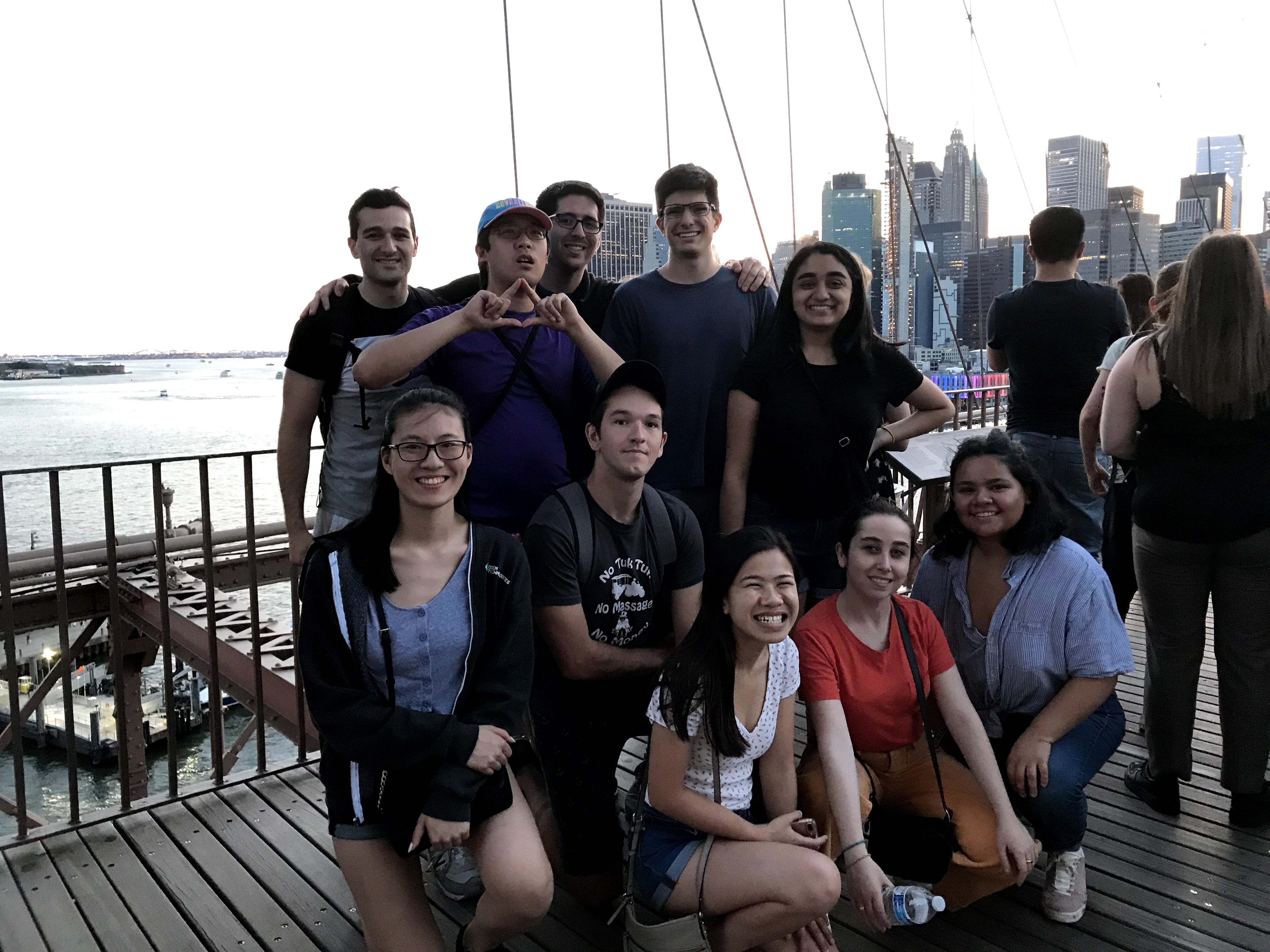 You can look at the general itinerary I set here

Basically I wanted to walk the whole city going to some old and new places, meeting up with plenty of friends along the way.

The tour began right at 6am at Palladium around Union Square where I met with two current hackNY fellows, Henry Shen ‘18 & Jon Wiggins ‘18. We started off the day at Joe Junior with a breakfast of pancakes, omelets, and donuts. We then took a quick stop to look around at the produce at the Union Square farmers market. The city was absolutely silent, we saw probably 10-30 people the entirety of this hour.

We walked uptown to my old mainstay St. Kilda’s coffee! Got a great flat white, and kept going uptown. We then took a break at Lincoln Center, sitting by the fountain

We went to my family’s favorite place, Zabars. An upper west side pillar, my family will order food here for all of our holiday parties. Here we got some bagels, rugelach, pastrami, and a black and white cookie. We then took a nice walk downtown as we entered the ramble. The ramble is one of my favorite areas of central park, because as you venture deeper in to the park, you hear fewer and fewer of the sounds of the city. We admired the beauty of the city from a distance as we went towards sheeps meadow.

I was planning on taking a nap at sheeps meadow, but it was closed unfortunately. So instead we went to the mall in Central Park, and hung out there, overlooking the big fountain there. We ate some of the things we got from Zabars, minus the rugelach. We just sat and chatted for a while, relaxing.

We walked uptown to the upper east side to go to Two Little Red Hens, where we got some of the best cheesecake I’ve had in NYC. It wasn’t too sweet, and it was really light. Once we finished the cheesecake, our group was about to expand. Before we went over the queensboro bridge to LIC, we met up with John Philip ‘18.

Walking over the bridge, we talked about what it would be like to live on Roosevelt island, with their neumatic trash system and the main form of transit being a gondola.

We arrived at John Brown Smokehouse basically as soon as it opened at noon. We got some of the best BBQ I’ve had outside of texas. We got the brisket and the burnt ends as well as a side of the mac and cheese, and the cornbread. Now our group expanded from 4 to 10, with a ton of other fellows joining in. This was a bigger break for us, spending around an hour relaxing eating BBQ here.

Our next destination was a cute little nordic bakery in Greenpoint called Bakeri. We got skølbrod (norwegian custard bun), ciabatta, a cinnamon roll, and a lemon poppy rose. Everything was delicious, but my favorite was probably the lemon poppy rose, it had some berries in it, which were absolutely perfect for the blistering heat of the day. We also met up with Emily ‘18 here (a mentor this year).

Next, we went to the legendary Pauli Gee’s slice shop. Rather than specializing in the traditional New York slice, they have some incredible sicilian style slices. I absolutely loved this slice because the bread was almost like a foccacia but a bit more charred on the bottom. We also had their NY slice, but it wasn’t as good. Here we met up with some more fellows and friends (Ray ‘18, Dan ‘19, and Annie, a friend of mine) in Pauli Gee’s, after we went to a little market that was across from Pauli Gee’s.

The market place was filled with a ton of vendors of niche goods… it was VERY brooklyn. Moving from one very brooklyn place to another, we continued to Smorgasburg in Williamsburg. We all broke off into small groups to get some bites, and we met up in the grass to relax for a bit.

We finally made it to Mekelburgs, a gourmet shop / beer hall in the Fort Greene area. While there, we got Cider, Beer, Cheese, Prosciutto, Crackers, and more! I picked a butterscotch-y Gouda and a Gorgonzola from Jasper hill, two of my favorites. 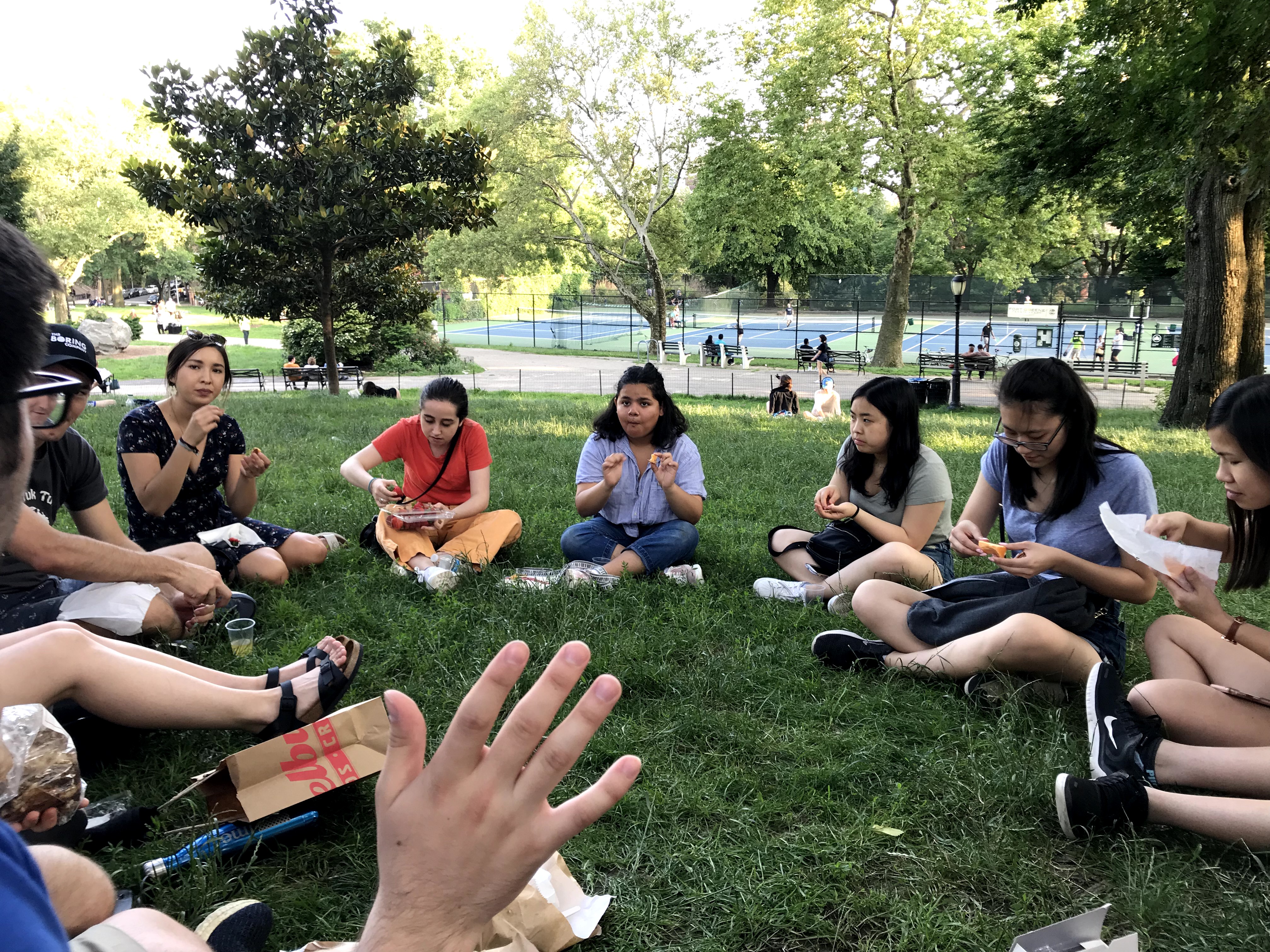 We took our newly acquired refreshments to Fort Greene Park where we were greeted by Sean Zhang ‘17. We found a great spot to camp out and began sharing our food and drinks, sharing stories with each other. This was perhaps my favorite moment of the day; a group of 16 people coming together to enjoy the outdoors with some great food.

Once we were done with our food at the park, we journeyed back to Manhattan over the Brookline Bridge right as the sun was setting. Although the bridge was packed, and people were starting to get tired of walking around, we kept trucking.

Eventually we arrived at our next destination with a group of almost 20 after we met up with Denis ‘17, Doug ‘17, and Biggie ‘16. We tried to go to Wo Hop, but it was too packed, so Biggie and I scrambled to find another place. Luckily, there was another incredible dumpling place right next to Wo Hop that allowed us to do a HUGE to go order right before they closed, Shanghai 21.

We got a feast of dumplings and took it to the nearby Columbus Park in Chinatown. It must have been a weird sight. A group of 20 people eating a crap ton of food in the middle of a park in Chinatown solely lit by phone flashlights.

After some of the group split off, the rest of us went to a lowkey speakeasy in Chinatown called Straylight. We got some great cocktails there and toasted to the success of the day. Unfortunately, this is when my body was in bad pain. At this point, we had walked more than 26 miles around the whole city, and I began chafing pretty badly. Doug and I went back to his apartment where I rested for a little bit, preparing for the last stretch.

In the last portion of the night, I took the group to my favorite bar in the city, William Barnacle. We got some great drinks, and had a nice time relaxing in the relatively quiet bar.

At around 1:30 am, we tried to go to Kenka, but unfortunately they were closing up! Normally Kenka doens’t close until 3 am, but for some reason they weren’t open. No fear! I had a back up planned, Village Yokocho, right around the corner (they’re normally open if Kenka isn’t.) BUT they were also closed, feeling desperate, we went to Yakitori Taisho back on St Marks. I didn’t think such a small restaurant could accomodate such a large group, but they prepared some tables in the WAY back of the restaurant. We kept walking through doors until they revealed a large, unfinished group space. It was absolutely perfect for our group, we could be as loud and rowdy as we wanted to without disturbing anyone else

At Yakitori Taisho, we ordered an absolutly insane amount of food and drinks. We got onigiri, fries, kara-age, yaki onigiri, yakitori, noodles, and more! We went around and played broken telephone for a while, which was easily the most fun I’ve had playing that game. All in all it was a great meal to cap the night!! At the end of it, we agreed that we should call that the conclusion because it felt so fitting.

Denis, Doug, and I walked back home and reflected on the day. For Denis and I, two people who now live in Boston, it felt like we were right back at home and made us miss the city immensely. I was overjoyed that the day went so well without any hitches. I got to see friends new and old, and eat our way through the city together. On my way home, I sent a message to this year’s fellows, this was my key takeaway from the day:

No matter where you are, explore and try something new, and if you can, take some friends along too.

I can remember only three years ago, you couldn’t catch me eating anything other than hot dogs and pasta, and I barely knew anything about NYC outside the Upper West Side and a little bit around Madison Square Park. This day for me was the culmination of my experience in NYC; friends, food, and exploration. I can’t wait to go somewhere new and explore.